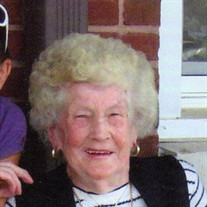 Anna M. Holland, 96, of Philadelphia, Pennsylvania passed away in her sleep on the morning of June 8th, 2014 at the Little Sisters of the Poor's "Holy Family Nursing Home". Anna Marie Holland was born on March 18, 1918 in Philadelphia, Pennsylvania, the daughter of the late Marie O'Sullivan and John Francis Casey. She was one the oldest of four children (Anna, Maryellen ("Maisie"), Jack and Larry. Anna took a trip to Ireland at age 2 and returned at age 5. She was in Ireland on the mother's family farm while Ireland and England were fighting over Ireland's independence. Once back home in the states, Anna lived her entire single life at 2411 Oakdale Street in Philadelphia; and aenjoyed her status as a resident of the "Swampoodle" neighborhood of the city. Anna graduated from St. Columba Grammar school in 1932 and Hallahan High School for Girls in 1936. Upon graduation and unlike Lucy and Ethel, Anna and several of her Hallahan High School girlfriends mastered the art of candy identification as chocolate decorators at Whitman's Chocolates. It was there she met Eleanor Povozan who introduced Anna to her brother John Holland. She was married to John P. Holland in Philadelphia on July 19, 1941. When WWII started on December 7, 1941, Anna's husband, John< joined the Navy. Anna lived in Portsmouth, NH two of the war years. After Portsmouth, she returned to the Philadelphia area and worked for the Government Rationing Board, the Cramp Ship Factor, the Reconstruction Finance Company and the Frankford Arsenal until 1949 when Anna and John started their family - and did not stop until seven children later in 1960. Anna possessed a keen ear for music, was an avid reader and very talented writer. When her husband John died in 1972, she returned to the workforce to support her family. Although she didn't have much in the way of material possessions, she was a loving mother who would give anything to any of her children who needed her help. "Grannie Annie", as she was affectionately called - always provided a roof over their heads, money for smokes and food in the fridge, particularly her famous meatballs and Irish Soda Bread. In 1989, at the young age of 70, she emjoyed her airplane ride, flying to San Diego, CA. for her son Michael's wedding. She also had memorable trips to Las Vegas, NV, Orlando, FL., Washington, DC, Rhode Island, Connecticut and Massachusetts. Into her 80's Anna was still involved in senior citizen clubs, wimning at Bingo, writing short stories and helping to publish monthly newsletters. She sadly buried two sons, Joseph Holland and Robert Holland, but is survived by her eldest son John Holland of Philadelphia, PA., daughter Maryanne Bednar of Elkins Park, PA. son James Holland of Philadelphia, PA., son Thomas Holland of Philadelphia, PA and son Michael (wife Lori) Holland of Flower Mound, Tx., five grandchildren (Sara, Adam, Jonathan, Makensie and Thomas) as well as four great grandchildren. She will be remembered for her kindness, her dedication to family, quick wit and quicker walking speed by all those who loved her. Memorial services are listed below. In lieu of flower, donations in Anna's memory may be made to the Little Sisters of the Poor at the Holy Family Nursing Home.

The family of Anna Holland created this Life Tributes page to make it easy to share your memories.

Send flowers to the Holland family.