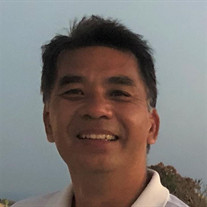 Dong, age 51, was born in a small fishing village in Vietnam. He yearned for education, opportunities, and success, so he fled his home country at the age of 13, leaving behind his parents and 9 siblings. He arrived in Malaysia as a refugee after escaping on a small boat. He would be taken into the care of Mr. and Mrs. Bill Gabrielson. They welcomed him into their family and cared for him as one of their own. He was a star athlete, playing both soccer and lacrosse. He was embodying what it meant to be an American. It was through sports that he made some of his lasting friends, developed his identity, and eased the transition into his new life in America. However, he never forgot his roots and did whatever he could, even in high school, to support his mother and family in Vietnam. He would go on to play lacrosse in college. After many changes in his studies, he discovered his love for business, got a degree in finance, and became a successful financial advisor. At a wedding in Philadelphia, he would meet a woman named Michelle. He knew immediately that he was going to marry her. They wed shortly after, starting their life and creating their family together. Dong was a man that was loved by many. Even if you only met him once, he would not hesitate to help you if called upon. He was selfless and kind, and always put the needs of others before his own. He would give you the shirt off of his back so that you would not be cold. He enjoyed the simple things in life. He loved the company of his family and friends. He enjoyed cold beers and good conversation. He loved to talk and exchange stories and jokes. When he laughed, he laughed with his whold body. His eyes would squint, a large smile would spread across his face, and his shoulders would move up and down. He was genuine, honest and thoughtful. His hard work and dedication towards his family never went unnoticed. He was someone you could always count on when you were sad, lonely, or in a crisis. He did whatever he could to provide for his wife and his family, taking them on trips around the world and immersing them in culture. He did not worry if his children would excel at sports or in their academics. Rather he cared about developing good character, that they would grow into respectable, caring, and thoughtful individuals. At the age of 50, he was diagnosed with liver and bile duct cancer. He fought bravely for over a year, but unfortunately succumbed to his illness on August 3, 2019. He was surrounded by his entire family and his close friends. He will be forever missed and always in our hearts. Dong is survived by his loving wife Michelle (Thanh Tung Luu), and two adoring children David (16) and Linda(23).

Dong, age 51, was born in a small fishing village in Vietnam. He yearned for education, opportunities, and success, so he fled his home country at the age of 13, leaving behind his parents and 9 siblings. He arrived in Malaysia as a refugee... View Obituary & Service Information

The family of Dong Bui created this Life Tributes page to make it easy to share your memories.

Dong, age 51, was born in a small fishing village in Vietnam....

Send flowers to the Bui family.