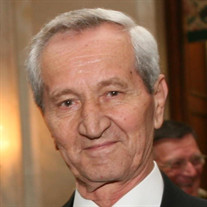 Gheorghe, one of seven children, was born March 17, 1934 in Ungureni, a village in Dambovita, Romania to Ion Mocanescu and Elena (nee Angelescu). He moved to Bucharest at the age of 14 to pursue and eventually obtain his technical diploma. It was in Bucharest's Cismigiu Park that he met the love of his life and wife of 60 years, Elena (nee Ionescu). They spent their first couple of years together enjoying motorcycle rides around the country. They married in 1960 and welcomed their only daughter Luminita into the world. Gelu, as he was affectionately known to his family, went on to work at the Institute of Nuclear Research at Magurele for 36 years, focusing on vaccuum techniques. He considered himself fortunate to be able to retire in his 50s in order to spend more time with his only granddaughter, Alina. At the young age of 75, Gelu and Elena made the brave decision to leave everything behind and move to the United States, in order to join their daughter and granddaughter who lived in Washington, DC. They later moved to Philadelphia. Gelu, who did not speak the English language, enjoyed greeting his neighbors and making friends with everyone he encountered. He also deeply loved his home country of Romania and told stories of its greatness in the olden days every chance he got. He proudly enjoyed talking about his home country when chatting with his son-in-law, Joseph and his granddaughter's husband, Alexander. In the last weeks of his life, nothing put a smile on his face like the sight of his seven month old great grandson, Benjamin. Gelu was an avid fan of the Romanian National Football team, of the Steaua Bucharest team, as well as any Philadelphia sports teams, especially when they played well. Later in life, he also discovered a passion for all things related to the University of Pennsylvania, as well as the University of Michigan, both being the alma maters of his grandkids. In lieu of flowers, donations in Gheorghe's memory may be made to: The American Liver Foundation https://liverfoundation.org CDC and PA. Funeral Director's Assoc. Covid guidelines will be strictly enforced.

Gheorghe, one of seven children, was born March 17, 1934 in Ungureni, a village in Dambovita, Romania to Ion Mocanescu and Elena (nee Angelescu). He moved to Bucharest at the age of 14 to pursue and eventually obtain his technical diploma.... View Obituary & Service Information

The family of Gheorghe Mocanescu created this Life Tributes page to make it easy to share your memories.

Send flowers to the Mocanescu family.