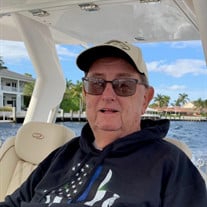 We lost a great man. James Patrick Hartnett, Sr. (Pop), was the son of the late William and Josephine (nee Zwolinska). He was the brother of the late William Hartnett, Josephine Donahue, and Dolores Hughes. James served his country in the United States Navy and later served his city as a Philadelphia Police Officer from October 17, 1977 until November 5, 1990. As a Rookie he served in the 25th District, then going to the 8th District and finally worked at the Roundhouse. He was on the Board of Directors for Police and Fire Handicapped Children and was the Police Liaison for the Valley Day School. Upon retiring from the Police Department, Jim used his skills to help troubled youth. He was a man who loved his wife, family and God. James was married to (and survived by) his wife Dorothy (nee Yacovelli) Hartnett for 52 years. Together they raised 7 children, all of whom Jim is survived by: Jimmy (Kathy), Kelly Martinelli (Sam), Michael, Jennifer Himes (Kenny), Brian (John), Danny (Jaci), Kevin (Amanda), as well as their adopted son Shawn Barrett, making that 8 children. Pop loved (as well as spoiled!) his 12 Grandchildren: Barbara Jean, Sean, Cory, Samantha, Brian, Emily, Shane, Dalton, Cienna, Ryean, Brynn-Rose, and Chase; and a Great Grandson Oliver and was considered "Pop" by many others. Jim was a man of great loyalty, courage, devotion and most importantly, love. He fought to the very end and passed peacefully surrounded by his family and friends. Heaven has gained an Angel! In lieu of flowers, donations in Jim's memory may be made to: FOP Survivor's Fund 11630 Caroline Rd. Philadelphia, PA. 19154 Interment is private.

The family of James Patrick Hartnett Sr. created this Life Tributes page to make it easy to share your memories.

Send flowers to the Hartnett family.