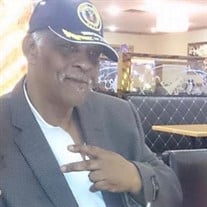 When you look at a blank canvas, what do you see? How about a lump of clay? Joseph saw not just potential but unspeakable beauty. He would not stop until he created that beauty and you as the outsider, saw it too. The same goes for people; he never saw the worst in anyone, only what they could be, and he would make them believe it too. Joseph Correll Clemens or "Butch" was born in Philadelphia, PA. and was the son of the late Richard Clemens and Louise Thomas Clemens. Joe attended St. Francis School for Boys and St. John's School for Boy. Though sometimes his behavior was far from exemplary, he was a bright and curious student who had an unquenchable thirst for knowledge that would follow him into his last days. Joseph volunteered and entered the Army in 1964, during the height of the Vietnam War. After proudly serving his country halfway around the world in Southeast Asia, he was granted an Honorable Discharge and full military disability pension. In 1976, he met Carolyn Dennis. From that union, the following year, he was granted the proudest part of his life; becoming a father, followed by becoming a proud grandfather. He would paint, draw, play chess, and teach auto mechanics to his daughters. When he became a grandfather, he did all of these same activities with his grandchildren including trying to teach them to play the guitar. Butch was a tinker, and loved working on TVs and anything electronic. He also loved to play his guitar and taught many how to be decent chess players; he had a great command of the game and was a master chess player. Butch was known for his generosity. If he thought you needed a shirt, he'd pull his off and give it to you. His heart was made of pure gold. He would do for others and genuinely not want anything in return. Joe died peacefully in his sleep on Sunday, October 29th, 2017 at his home in Germantown. He is survived by his two loving daughters, Oriel, "T", Harris (James) and Ciara, "CC" Robinson (Gerald); his adoring grandchildren Jaslene and Arya Harris, Shyla, Chloe, and Lincoln Robinson; his brothers Michael, Richard, and Larry Clemens. He was preceded in death by his sister Crystal Rose Cornitcher "Chrissy". He is also survived by a host of cousins, nieces, nephews and extended family. The family sincerely thanks everyone for cards, flowers and sympathy shown to us. From the first letter of St. Peter: Beloved, sanctify Christ as Lord in your hearts. Always be ready to give an explanation to anyone who asks you the reason for your hope, but do it with gentleness and reverence, so that when you are maligned, those who defame your good conduct in Christ may themselves be put to shame. For it is better to suffer for doing good, if that be the Will of God, than for doing evil. For Christ also suffered for sins once, the righteous for the sake of the unrighteousness that might lead you to God. Put to death in the flesh, He was brought to life in the Spirit.

When you look at a blank canvas, what do you see? How about a lump of clay? Joseph saw not just potential but unspeakable beauty. He would not stop until he created that beauty and you as the outsider, saw it too. The same goes for people;... View Obituary & Service Information

The family of Joseph Correll Clemens created this Life Tributes page to make it easy to share your memories.

When you look at a blank canvas, what do you see? How about a...

Send flowers to the Clemens family.