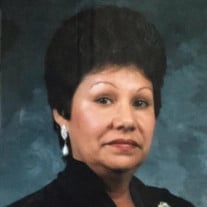 On Sunday, July 5, 2020, Maria fell asleep in death after a long struggle from the effects of Dementia. Maria "Meri" was born April 10, 1944 in Mariana, Humacao, Puerto Rico to Alejandro Molina and Vicenta Medina. She was one of six children. She moved to Philadelphia in the 1950's and married Santos Roman on November 28, 1964. They were blessed with three daughters: Maria, Georgina, and Cristina. She was a devoted daughter, wife, mother and grandmother. Maria was a homemaker and worked at different clothes factories in the Philadelphia area, which made her a great seamstress, making various outfits for her daughters. When Maria went on her first cruise she found out she loved Calypso music. Whenever she heard the music play, her eyes lit up and she was ready to dance! Another favorite was coffee! If you had no energy, drink coffee. If you didn't feel good, drink a little bit of coffee. If you were already full, drink some coffee. If you are getting ready for bed, have some coffee. We know what she'll be ready for in the new system-coffee. Maria was first introduced to Jehovah's Witnesses by her brother, Luciano. At first, she would hide behind the refrigerator when they would knock on her door. Eventually, she softened up and agreed to a personal Bible study. While learning Bible truths, she also learned to read and write with the help of the sister that gave her Bible lessons. Maria symbolized her dedication to Jehovah by water baptism at Buckingham Assembly Hall on February 29, 1973 and was a faithful servant for 47 years. Maria is preceded in death by both of her parents, Alejandro and Vicenta, her four brothers: Adrian "Alejo", Adalberto "Kuko", Luciano "Chano" (Alice) and Cecilio "Ceci" Molina. Maria is survived by her husband Santos; her three daughters: Maria Charles (Brad), Georgina Suarez (Angelo), Cristina Roman and Von Briggs: three grandchildren: Marcia Lorraine Tollerson, Joshua Aidan Roman and Madison Isabella Briggs: her sister Luz, her nieces: Alice Allan (David) and Lucia "Lucy" Molina. She will also be missed by other nieces, nephews, family and friends.

On Sunday, July 5, 2020, Maria fell asleep in death after a long struggle from the effects of Dementia. Maria "Meri" was born April 10, 1944 in Mariana, Humacao, Puerto Rico to Alejandro Molina and Vicenta Medina. She was one of six children. She... View Obituary & Service Information

The family of Maria Roman created this Life Tributes page to make it easy to share your memories.

Send flowers to the Roman family.