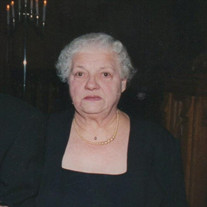 Olga Kwasnjuk ( nee Jackowa ) was born December 29th,1922 to Nikolaus and Sofia, in Proskurow, Ukraine. At 17, she was separated from her family and was forced labor in Germany. As the second world war neared an end, she met her future husband, Jaroslaw. They married and settled in Siegetsbrunn- Hochenkirchen , outside Munich Germany.They had four sons , Nikolaus, John, Peter, and Wolodemir, before emigrating to the United States in 1956. They had another son, their youngest, Emil. Jaroslaw passed from this life and his beloved Olla , in 1971. Olga had a green thumb, she loved her garden. If you gave her a plant, it was still thriving twenty years later. She also loved music. As a young girl, she hoped to be an opera singer. She passed this love of music to her children and grandchildren. Olga worked hard her entire life, as a knitter in Philadelphia's mills, long since boarded shut, and beside her husband, raising their children. Olga is survived by her five children, Nikolaus (Jeanne), John (Eunice), Peter (Alice), Wolodemir, and Emil, 15 grandchildren, 26 great-grandchildren,and 2 great-great grandchildren.Olga was a special, strong lady. She was a survivor. She passed from this world February 29th, 2016 surrounded by her family and loved ones.Special thanks to Doris and Herb Fredericks who hosted Olga in their home for many holidays and didn't leave her side. She now rests in the palm of our Lord Jesus Christ. Rest in Peace, Olga, know that you are loved, cherished, and will be missed deeply. From Nik's eulogy at the viewing: A long time ago, a young seventeen year old girl left her home in the Ukraine as forced labor for Germany, working on a farm, never to see her home or family again. This was something that she dealt with her entire lifetime. Despite the devastation in the aftermath of war, hunger, and the shortages of everything, my parents met, married and started a family. I was born first, in 1946, followed by John, Peter, and Wolodemir. Life in war torn Germany began to improve.We settled in and lived life as Germans. Mom and Dad had a garden with chickens, rabbits, and an occasional pig. My dad even grew his own tobacco. They worked at any job they could get, mom even worked as a welder. The one job she always wanted was to be a singer. She had a beautiful voice,but they didn't have American Idol then and that dream never became a reality. She also loved nature, flowers, and gardening. Some people have a green thumb, she had ten green fingers. Whatever she planted thrived, including myself and my brothers. I personally think that I had a great childhood.I learned to be happy with the simple things oflife;like pulling our big sled into the woods and bringing back our Christmas tree and decorating it with real candles and tinsel, or gathering real moss to line Easter nests for the Easter bunny, my mothers knodels, Bavarian dumplings with roast beef and gravy, and Olga's famous pierogies and apple strudel, and a big wooden barrel of her sauerkraut in the cold cellar. In 1955, many of their friends were emigrating to America, Canada, Australia,and South America. She wanted to do the same. We finally got our visas, and with three wooden crates, we too moved to America. My parents found work at various places, then at a knitting mill, where they both worked, my dad until he died, and my mom until she retired.The owners of the mill were a German family who took them under their wing. They helped them fill out required paperwork and helped them to find a home. They soon welcomed the baby of the family, Emil. We all settled in and lived life as Americans. During the past few weeks her stories that I heard over and over growing up, sometimes getting annoyed, all of the sudden became words of gold. We brought a recorder to her bedside to record every word. I had to feed her, a spoonful at a time, and she said softly " I used to feed you, now you have to feed me." I held her hand for hours and we talked and sang till the end. I made complete peace with my mother. My mother didn't become an opera star, but she did leave many memories, some good, some not so good. She left five sons, fifteen grandchildren, twenty-six great grandchildren, and two great-great grandchildren. And you know what, that's better than winning American Idol anytime. Mom Rest in peace in the arms of our Lord. I love you.

Olga Kwasnjuk ( nee Jackowa ) was born December 29th,1922 to Nikolaus and Sofia, in Proskurow, Ukraine. At 17, she was separated from her family and was forced labor in Germany. As the second world war neared an end, she met her future husband,... View Obituary & Service Information

The family of Olga Kwasnjuk created this Life Tributes page to make it easy to share your memories.

Send flowers to the Kwasnjuk family.