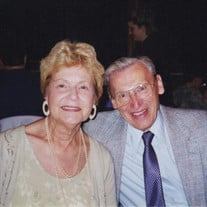 William (Bill) Henry Colvin, 90, of Symphony Manor, passed away at St. Mary's Medical Center in Langhorne, PA. on January 13, 2016, 11 days after his beloved wife. William was born in Brooklyn, NY on December 10, 1925 to Robert and Isabella Colvin (nee McLaren). Bill is predeceased by his wife, Louise of 67 years: brother Robert Colvin: and daughter-in-law Maureen Colvin. Bill is survived by his 3 sons William R. Colvin (Roslyn) of Fredericksburg, VA: Brian G. Colvin (Susan) of Churchville, PA: and Glen S. Colvin of Gainesville, VA: his 7 beloved grandchildren Bill, Keith, Kelly, Kacey, Cody, Mike and Brittany and his 4 great-grandsons. After graduating from, high school, Bill enlisted in the US Marine Corps at the age of 17 and served in the Pacific theater during WWII where he participated in the action against the enemy at Okinawa. After the war Bill served in the reserves when he was called back to serve in the Korean Conflict. After his enlistment Bill went to work for the Pfizer Chemical Corp in NYC. In 1957 Bill took a job with the US Postal Service and moved to Commack, NY where he and Louise raised their family. After retiring from the post office Bill accepted a security position for the Eaton Corporation. In 1992 Bill and Louise moved Virginia to be close to family. In 2015 Bill and Louise moved to an assisted living facility in Pennsylvania. Bill was known for his quick wit and dry sense of humor which he used to the pleasure of those around him. He always made time for his family supporting his children at school activities and sporting events. His favorite activity was to watch his sons and grandchildren playing sports in both high school and college. He enjoyed driving from Long Island to NJ, PA and VA to be with his sons' families at holidays and important events for his grandchildren. Among his pleasures were reading, his "cup of coffee" and being involved in his grandchildren's lives. Most of all, Bill was completely devoted to his beloved wife Louise. Bill always felt that his purpose in life was to be at his wife's side and now he will once again be by her side for all eternity. A funeral service for both Bill and Louise will be held on Saturday, January, 30, 2016. PLEASE NOTE: SEE DETAILS FOR FUNERAL SERVICES BELOW. In lieu of flowers, donations in Bill's memory may be made to the Injured Marine Semper Fi Fund 825 College Blvd. Suite 102 PMB 609 Oceanside, CA 92057 www.semperfifund.org or The Breast Cancer Research Foundation 60 East 56th St. 8th Floor NY, NY 10022 www.bcrfcure.org

William (Bill) Henry Colvin, 90, of Symphony Manor, passed away at St. Mary's Medical Center in Langhorne, PA. on January 13, 2016, 11 days after his beloved wife. William was born in Brooklyn, NY on December 10, 1925 to Robert and Isabella... View Obituary & Service Information

The family of William Henry Colvin created this Life Tributes page to make it easy to share your memories.

Send flowers to the Colvin family.